Skip to content
Home > Books > Red Audrey and the Roping

Red Audrey and the Roping

Occasionally a debut novel comes along that rocks its readers back on their heels. Red Audrey and the Roping is one of that rare and remarkable breed. With storytelling as accomplished as successful literary novelists like Margaret Atwood and Sarah Waters, Jill Malone takes us on a journey through the heart of Latin professor Jane Elliot.

Set against the dramatic landscapes and seascapes of Hawaii, this is the deeply moving story of a young woman traumatized by her mother’s death. Scarred by guilt, she struggles to find the nerve to let love into her life again. Afraid to love herself or anyone else, Jane falls in love with risk, pitting herself against the world with dogged, destructive courage. But finally she reaches a point where there is only one danger left worth facing. The sole remaining question for Jane is whether she is willing to accept her history, embrace her damage, and take a chance on love.

As well as a gripping and emotional story, Red Audrey and the Roping is a remarkable literary achievement. The breathtaking prose evokes setting, characters, and relationships with equal grace. The dialogue sparks and sparkles. Splintered fragments of narrative come together to form a seamless suspenseful story that flows effortlessly to its dramatic conclusion.

Winner of the Bywater Prize for Fiction, Red Audrey and the Roping is one of the most memorable first novels you will ever read.

About the Book
Endorsements
Malone has lived in Hawaii, and in her first novel, the land and sea are as much characters as the heroine, Jane, and her cronies. The loss of her mentally unstable mother to suicide has left this thirtysomething university Latin instructor wracked with guilt, and fleeing the risk of intimacy, although as a long-board surfing enthusiast, she risks the biggest waves. Told from an accident survivor’s viewpoint from a hospital bed, Malone’s tale of love in the tropics is something of a wave itself. Luminescent writing swells with the heady rush of the past, with its rich tapestry of mournful mother yearning, mixed with lush sensuality experienced in the arms of her landlord, Emily; then crashing to an invalid’s grim reality of casts and IV drips. The roping, a linguistic holdover from the heroine’s years in Ireland, refers physically to the ties binding Jane to her sadist male lover, Nick, and figuratively as the entanglement of feelings. Finely tuned, daring, and perceptive, Malone’s auspicious debut leaves us wanting more.
– Whitney Scott, Booklist
“This is a literary gem . . . one of the best books I’ve read this year.”
– Ellen Hart
"This raw and convincing first novel is narrated by a woman who can’t help testing the limits of her ability to endure pain in her intimate relationships with men and women... the vivid characters and potent emotions keep the pages turning."
– The Advocate
About the Author 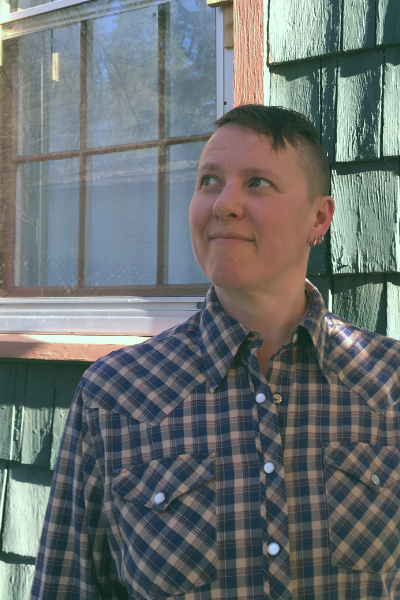 Jill Malone grew up in a military family, went to German kindergarten, and lived across from a bakery that made gummi bears the size of mice. She has lived on the East Coast and in Hawaii, and for the last seventeen years in Spokane with her son, two dogs, a hedgehog, and a lot of outdoor gear. She looks for any excuse to play guitar. Jill is married to a performance artist and addiction counselor who makes the best risotto on the planet.

Giraffe People is her third novel. Her first novel, Red Audrey and the Roping, was a Lambda finalist and won the third annual Bywater Prize for Fiction. A Field Guide to Deception, her second novel, was a finalist for the Ferro-Grumley, and won the Lambda Literary Award and the Great Northwest Book Festival.

Look Inside
Disclosure of Material Connection: Some of the links in the page above are "affiliate links." This means if you click on the link and purchase the item, I will receive an affiliate commission. I am disclosing this in accordance with the Federal Trade Commission's 16 CFR, Part 255: "Guides Concerning the Use of Endorsements and Testimonials in Advertising."